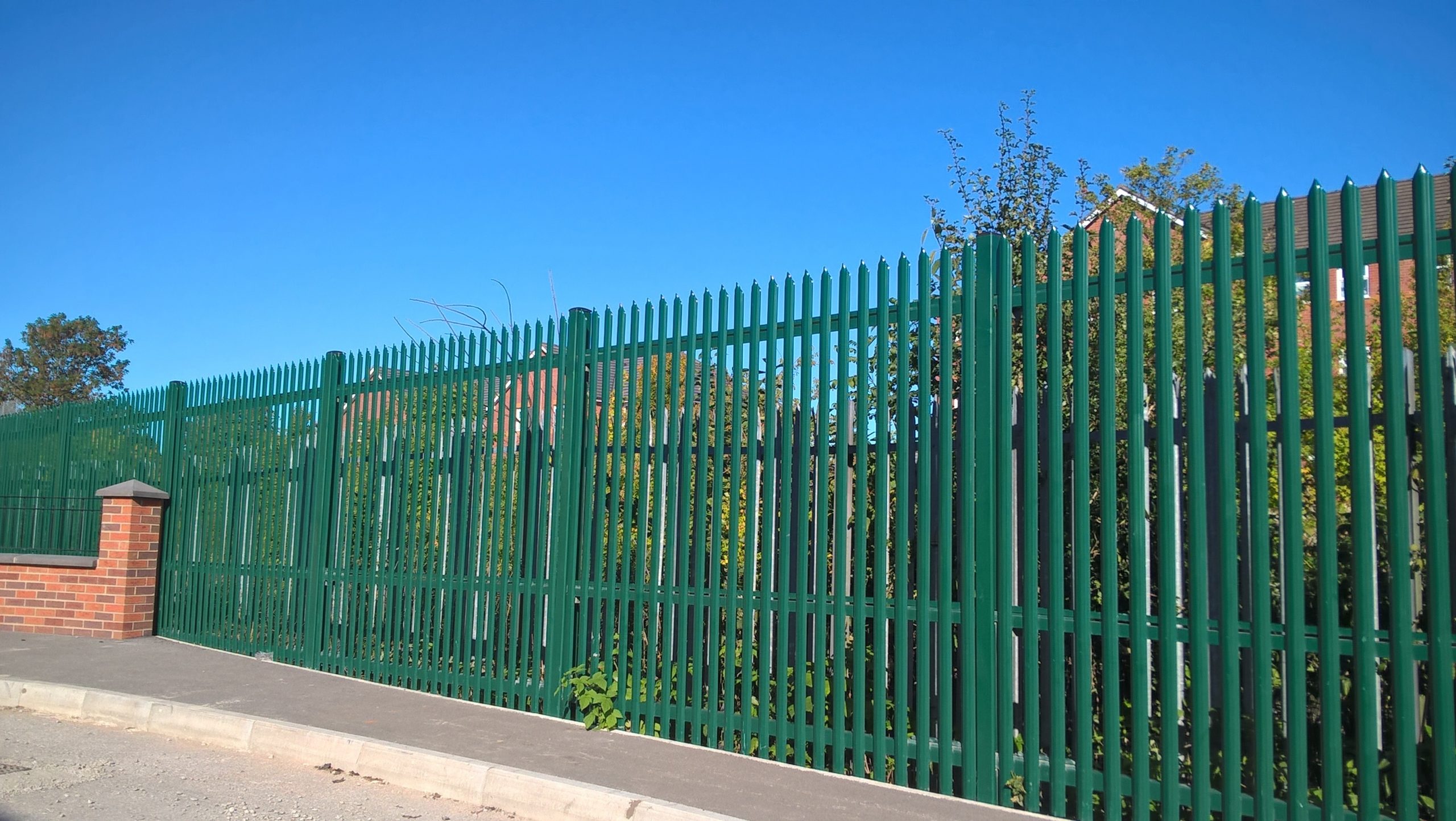 The Complete Guide To Palisade Fencing

The Complete Guide To Palisade Fencing

Palisade security fencing, however, is one of the most commonly used fencing systems across the world. Depending on your requirements, there are a range of options available when is comes to palisade fencing. The security provided can range from standard boundary demarcation to defending against attackers using powered tooling and petrol grinders for a set amount of time.

The palisade design has been around for over 100 years. Standard palisade can be breached pretty rapidly depending on the intruder’s experience and access to specific tools. That’s why Barkers’ designed their highly accredited, high-security palisade fencing systems, offering unmatched levels of security and deterrence.

In this guide we will cover:

Palisade – What is it?

Palisade security fencing is made of steel pales which are attached to horizontal rails, connected to sturdy vertical joists or ‘posts’. Due to being versatile and sturdy, it addresses a wide range of perimeter security needs and has seen immense popularity because of this.

The constructed steel fence creates a solid barrier to entry, or boundary, which is perfect for large industrial areas and public spaces alike.

Most commonly, steel palisade fencing can be built in heights ranging up to 3.6 metres in a single pale.

The Benefits Of Palisade Fencing

Palisade fencing is so widely used because of the wide array of benefits it offers to those who use it. Steel palisade can be found all over the world in areas like schools, airports, railways and datacentres  to name just a few, as well as a whole variety of industrial sites.

Let’s break down some of the most unique benefits palisade fencing offers:

Palisade fencing has been so popular for its ability to secure property and land, that even the ancient Greeks and Romans were seen to construct it around their camps and fortresses. Palisade has come a long way though, as the wooden fencing employed by those ancient empires has been upgraded to galvanised steel.

This treated steel accompanied with the palisade design is why palisade fencing is the go-to solution for securing perimeters.

Palisade fencing comes in a range of security levels. Standard palisade has received some criticism in recent years because the fastener on standard systems can be breached fairly quickly with a hammer. Whether this is a problem for you depends on whether your threat is carrying tools and what tools they may be.

If you’re looking for standard palisade, it’s best to buy a high quality product, one that has been manufactured to meet British Standard or higher. Palisade that falls below British Standard may be pushed over or the rails may sag over time because they are not strong enough to take the weight of the pales.

However, in the last couple of decades palisade fencing has been engineered to mitigate emerging threats. Therefore, the level of security provided has improved. Later in this blog we’ll take you through the different levels of security available.

Palisade can naturally adapt to contours in the ground during installation. For example, Barkers high-security palisade can cope with up to 33 degrees of sloping ground without cutting down bays or making modifications such as constructing steps.

The protective zinc coating that Barkers use on their fencing protects the steel from corrosion and can be enhanced by polyester powder coating to achieve any RAL colour finish.

Palisade fencing is made using strong steel pales which have often been reinforced, that along with pointed tops, deters attempts to break in as attackers can see the difficulty of entry.

Palisade fencing is designed to look intimidating with sharp edges and points to deter climbing.

To make a fence difficult to climb your palisade security fence should be high with no footholds. As mentioned earlier palisade fencing can be 3.6metres high in a single pale. And as you go to high security variants of palisade fencing the pales become closer together creating smaller spaces, way to small to gain a foothold.

The Cons of Palisade Fencing

Whilst these are not necessarily cons in palisade fencing design, they are considerations to keep in mind when specifying the type of fence on your site.

Although palisade fencing is renowned for its ability to look intimidating for possible intruders, this benefit could also be seen as its biggest downfall. Generic palisade fencing can look unappealing, especially in or around residential areas, causing concern.

However, as the below image demonstrates, palisade fencing doesn’t have to look out of place and when done right can fit into its surroundings.

Due to the extra solid steel in the palings, palisade fencing is more expensive than standard mesh fencing systems used for boundary demarcation.

Whilst the initial cost will be higher for palisade, it’s worth mentioning that repairs are fairly cheap to carry out, as the separate pales can be replaced individually.

Within standard palisade fencing, the pale fixing is the biggest weakness of the system and can be easily removed if an intruder has the knowledge to do so.

This problem is then compounded as those pales (which have been breached) can be placed back into position, making the security threat harder to detect.

As a direct response to this, Barkers developed high-security derivatives, which use special high load fixings and fasteners capable of withstanding both hand and power tools.

Adding a security topping further deters people from climbing over the fence and can be added during the specification process.

Palisade fencing systems can have several security toppings variants added to them. However, the most commonly seen toppings are:

As shown below these can be added onto Y or T extensions within the fencing: 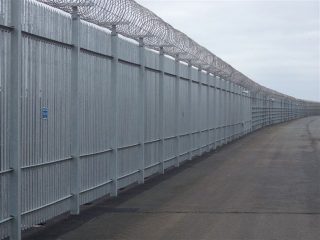 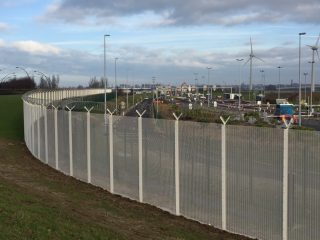 Optional Palisade Fencing Features: Barkers offer pales that curve outwards on their palisade fencing as an extra deterrent against climbing.

LPCB has been working with industry and insurers for more than 100 years to set the standards needed to ensure that fire and security products and services perform effectively.

In recent years LPCB’ has gained momentum for being all-encompassing and universal. It is being adopted by schools, healthcare facilities, the water industry and data centres to name a few.

CPNI (Centre for the Protection of National Infrastructure)

CPNI is the government authority for protective security advice to the UK national infrastructure – Products with this accreditation have been tested and approved for use on government infrastructure.

ASTM is an international standards organization that develops and publishes voluntary consensus technical standards. This is widely used in the US and the Middle East.

Possibly the biggest difference between mesh and palisade is the installation. Typically mesh systems have 10% shorter post centres, which in turn means more holes to be dug and more concrete to be poured.

Although palisade typically has fewer holes to be dug, it comes in smaller pieces and does require the rails to be inserted into the posts and the pales being fixed to the rails.

Mesh fencing has large, rigid panels. If the ground is uneven or there is any kind of sloping ground, the fence will have to be buried or stepped, requiring additional labour and posts to stop gaps appearing under the fence.

With security variants of mesh, they usually have to be buried in the ground to stop the bottom of the panel from being prised up. A small number of mesh systems such as SecureGuard SL2X don’t have to be buried as long as they are completely flush to the floor with no gaps beneath to create a solid stance.

Barkers’ StronGuard palisade can cope with slopes of up to 33 degrees without the contractor needing to cut anything down or buy and install extra posts. This creates a more convenient solution and easier installation when dealing with uneven ground.

Whereas mesh is delivered as large panels, palisade fencing is delivered piece small, making it easier to handle around the site and take to areas with poor access.

Security variants of mesh have additional strengthening features such as double skins or anti-cut bars which all add weight to the panel. SecureGuard SL2X is one of the lightest panels to have achieved LPS 1175 B3 accreditation, but a single 2.4m high panel weighs 92kg and a 3.0m high panel weighs 118kg. The weight and size may make manoeuvring difficult.

Palisade is widely used all over the world, and hopefully, it’s clear now to see why. From its intimidating appearance to its impressive security credentials, palisade is a go-to for deterrent and high-security fencing.

Alongside its standard security features, there are also some optional features you can add to further add to the security level of your fencing.

With Barkers Fencing, you gain access to over forty years of expertise in the design, manufacture and delivery of high-security fencing, developed to meet the most stringent national and international standards.