There are many different reasons for needing a security fence; however, more often than not they all have a similar purpose. That’s to protect the assets inside a facility.

In most cases that asset is of a sensitive or valuable nature. When it comes to making a railway line secure, that asset we’re protecting is a human life.

Whether it’s preventing people trespassing on the tracks, or reducing the risk of stray vehicles derailing trains, and causing mass deaths and injuries, security fencing around a railway line is essential.

Managing the Accidental Obstruction of the Railway by Road Vehicles

2001 saw an unfortunate road vehicle incursion (RVI), where a vehicle left the carriageway of the M62 and ended up on the railway line resulting in 2 trains derailing, including a passenger train, killing 10 people.

This resulted in the department of transport making network rail, highways England and local authorities responsible for mitigating the risk of a road vehicle finding it’s way onto the track.

RVI presents both a risk to railway users and vehicle users using infrastructure close to the railway.

The most severe incidents occur when road vehicles are not stopped from reaching the railway and a train strikes a vehicle on the track.

What is an RVI?

Simply put a road vehicle incursion (RVI) is the intrusion of a vehicle or part of a vehicle over the boundary between network rail and any third party at an overbridge or a neighbouring site.

The usual place where an RVI will occur are:

An RVI can pose a huge risk to both the driver as well as railway users, making the need for protective fencing just that much more important, to increase the safety of everybody involved.

Mitigate The Risk of RVI with High-Security Fencing

Faced with this challenge of reducing the chance of a repeat of the 2001 incident, the Government issued a white paper stating change had to be made to stop this from happening again. Measures such as Parapits, Armco barrier and trees are traditionally used to mitigate the risk. These mitigation solutions are usually in addition to security fencing which is being used to keep trespassers out. However, where space is limited between roads and the railway, Network Rail needed a different solution.

StronGuard™RCS is an all-in-one perimeter security system to prevent vandalism, trespass and road vehicle incursion (RVI) on the railway.

This palisade fence is able to stop a 7.5-tonne vehicle travelling at 30mph in standard fence footings and is now being used to protect the Rail Infrastructure from accidental obstruction of road vehicles to prevent harm to employees, the public and infrastructure.

It is also a highly secure palisade fence attack tested by CPNI, for use on the UK’s critical national infrastructure. It has no footholes and is fixed from the back using a high load anchor making it difficult to climb or attack. 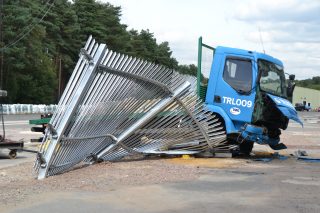 Palisade fencing is ideal for preventing RVI as it can easily be installed into uneven ground.

Specifying Security Fencing to Mitigate the Risk of RVI

Following the department of transport’s white paper, it made network rail, highways England and local authorities responsible for mitigating the risk of RVI on train tracks. It meant all parties had to ask themselves “how can we react?”.

StronGuard™RCS all-in-one perimeter security system can be used on its own to protect railways from RVI’s.

When it comes to specifying a solution to mitigate the risk of an RVI, high-security fencing might be the ideal solution. Get in touch to discuss your operational requirements or arrange a free site assessment. 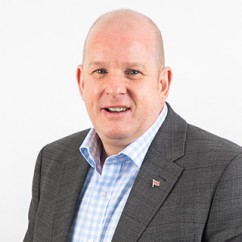 Russell’s security career began in 2006 when Barkers were tasked to develop a highly secure fence to prevent security breaches at a high profile mine in Papua New Guinea.

At the time Russell was managing Barkers Fastener division, playing a pivotal role in the development of StronGuard. Due to the success of StronGuard, Russell became Business Development Director for our high security products.