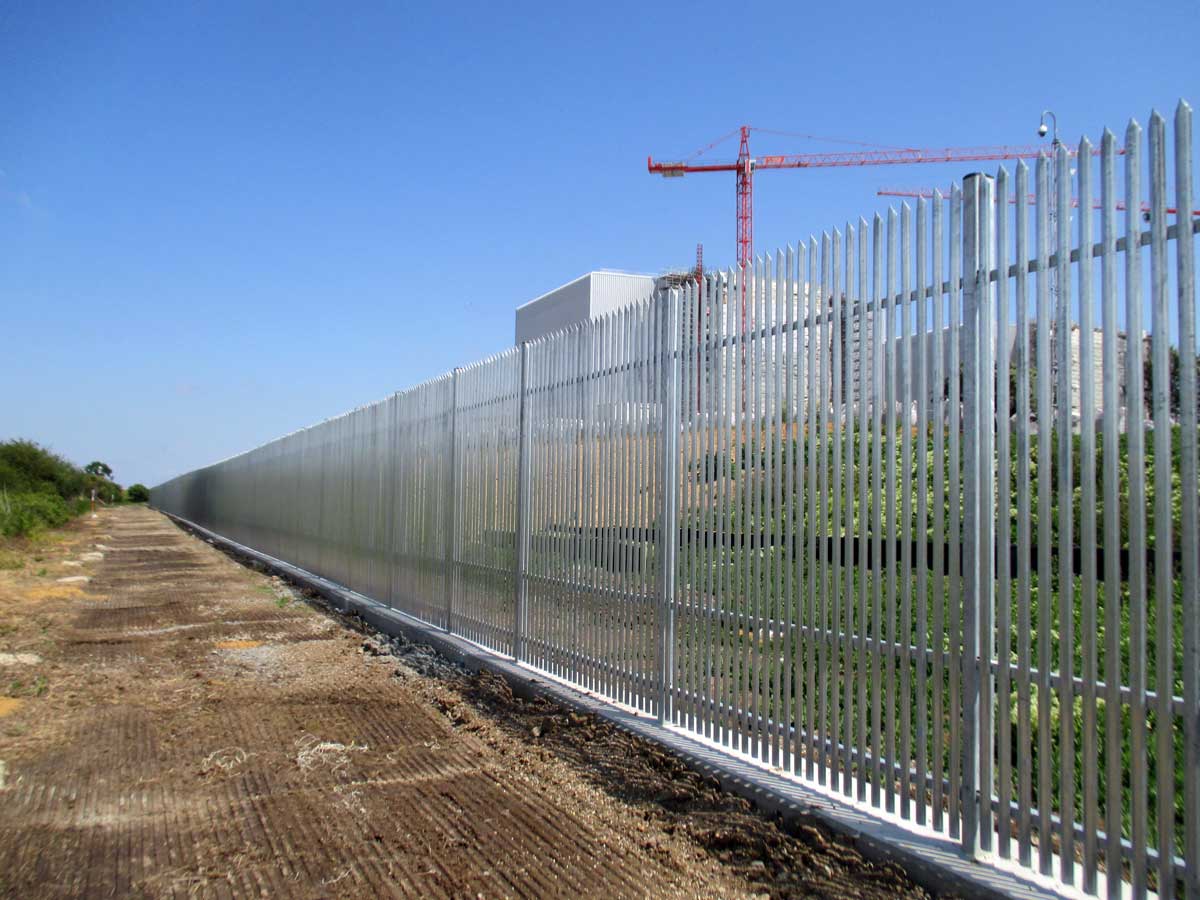 When it comes to specifying high-security fencing, there is a range of options to choose from. But the two main choices are palisade security fencing or mesh security fencing. Both in their own right have different benefits and in theory, both metal fences are designed to do the same thing; to protect high-value assets and sensitive sites.

Barkers Fencing is well placed and in a unique unbiased position to discuss the merits of both systems as a market-leading company producing both palisade & mesh systems, and despite what some suppliers with a specific agenda may tell you, it is not simply a case of mesh is good and palisade is bad.

Depending on the intruders experience and access to various tools standard palisade and mesh can be breached fairly quickly therefore it is often used as a demarcation solution. High-security derivatives are available of both systems.

However, there are benefits and downfalls for each. In this blog, we will be highlighting both, to hopefully aid you in your decision, when it comes to specifying a metal high-security fence.

The palisade design itself has defied time, having been around for almost 100 years. It has taken a hit in recent years following a range of misconceptions and videos of people levering the bolt that fixes the pale to the angle and being able to remove the pale. As with most products, all palisades are not the same. There are many varieties with a range of security provided.

High-security derivatives have been developed of both systems to combat physical attack and intrusion and provide a formidable long-lasting barrier against would-be intruders. High-security palisade is deployed around the world to protect assets such as mineral mines, nuclear installations, data centres and many UK CNI establishments.

One of the main pros of palisade fencing is its intimidating appearance. The fence can range anywhere up to 3.6meters high in a single pale. triple or single-pointed pale design makes people think again about climbing the fence because it would be easy to get caught or impaled on. To enhance this further security toppings can also be added, you can also add a second lift which can increase the hight of the actual palisade.

Palisade security fencing is made using strong steel pales which have often been reinforced, that along with added pointed tops, deters attempts to break in as attackers can see the difficulty of entry. To make palisade even harder to climb some clients like to have the pale curved outwards. This makes the fence even more intimidating and perceived to make the fence even harder to climb.

It is also extremely easy to install and much more convenient in most cases than its mesh counterpart. Palisade comes piece small in individual pieces as opposed to large mesh panels, making it easier to manoeuvre and put together.

Palisade can adapt to contours in the earth. Barkers high-security palisade can cope with sloping ground up to 30 degrees without the need for on-site modifications such as steps.
As well as having no obvious footholds, it would also be difficult to create any steps in the structure.

Made from mild steel, palisade fencing is hot-dip galvanized to give it an expected average life span of around 25 years. The protective zinc coating protects the steel from corrosion and can be enhanced by polyester powder coating to any RAL colour.

One of the cons of standard palisade is the weakness of the fixing, however, high-security derivatives use special high load fixings and fasteners which are proven to defeat hand and power tools as set out by the various standards used for the accreditation. It also has no post fasteners/fishplates which is perceived as a weakness on standard versions. 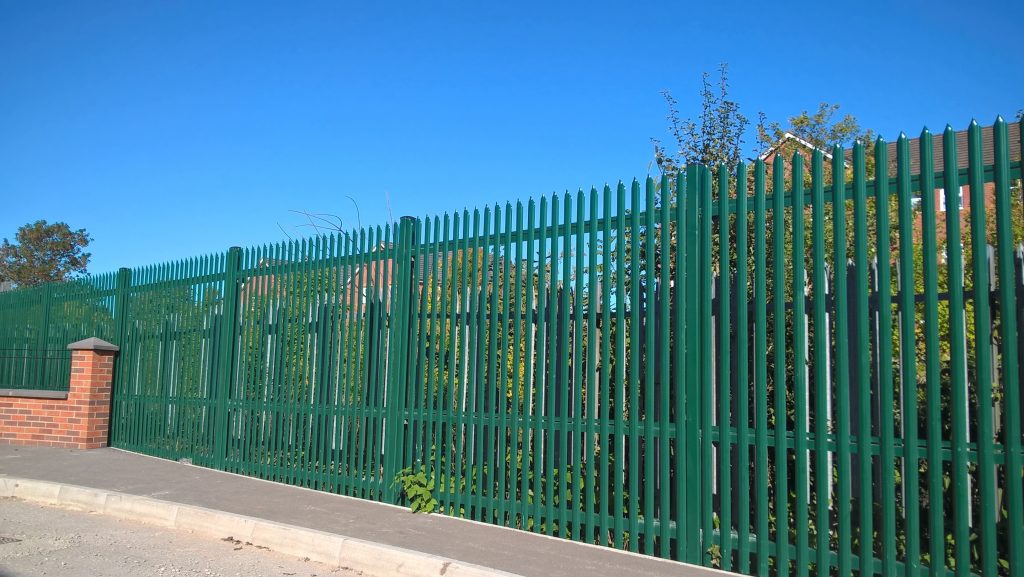 Although palisade fencing looks very intimidating, which is a huge deterrent benefit, it may also be its biggest downfall. If a site is near a residential area, people may not want a fence they think will look invasive. But as the image above shows, palisade fencing doesn’t look out of place on this new housing development in Wythenshawe, Manchester and this particular example provides a high level of security and hostile vehicle mitigation to stop vehicles incurring onto the train lines.

Because there is more solid steel in the palings, in its most standard format palisade is more expensive than standard VGuard type mesh systems used for boundary demarcation. The additional steel content does mean it can be more difficult for CCTV to see through the fence.

And in the standard versions of palisade most commonly sold in the UK, the pale fixing is the weakness and can be easily removed if an intruder has the knowledge to do so. The problem can then be compounded as the pales which have been breached can be placed back into position, making the security threat harder to detect. However, high-security derivatives developed by Barkers use special high load fixings and fasteners which defeat hand and power tools. [AS1] This alone makes using a tested palisade system a very attractive option.

Mesh fencing entered the market in the early 1990s and it has fast become very popular because it is considered to be more aesthetically pleasing than palisade.  It’s typically used around schools or commercial premises as it just looks a bit more friendly and decorative due to the reduced steel content and less aggressive top line.

Similarly, to palisade, mesh fencing can range in the security level it provides.

Mesh is more visually appealing, meaning it is preferred for not disrupting the general public living close to the site. Resulting in mesh often being used for Schools in residential areas. It is ideal for flat surfaces as mesh fencing comes in rigid panels.

Standard /demarcation mesh fencing is usually around 40% cheaper than standard palisade fencing as it has less steel, making it more economical. However, when comparing security derivates of mesh and palisade the variance in price difference usually switches.

You can also upgrade your mesh fence with added toppings such as different forms of barbed or razor wire, or electric pulse fencing to deter people from going over the top.

One of the biggest myths around the world is that mesh fencing is “ANTI-CLIMB”. The most obvious way to attack mesh is to snip the wires using simple hand tools. This can be to create footholds, without causing too much of a commotion. Another AID to climbing mesh fencing is using common instruments such as a knife and fork or a screwdriver in a similar way to mountaineering climbing aids. The majority of the time mesh fencing needs to be installed with a topping to deter people from climbing.

Mesh panels are often ‘pre-galv’. This is a process where the immersion time in the zinc is shorter and excess zinc is removed. With a thinner coating, the steel will not be protected from the elements for as long as a hot-dipped galvanized finish, meaning the fence must be powder coated to add to the protection. Although more expensive ‘galfan’ panels can be used, this is the minority in terms of mesh panel numbers sold in the market, meaning most mesh systems have a shorter expected lifespan than palisade.

Another disadvantage is that because it’s visually more appealing than palisade, it may be perceived to be less secure, and easier to attack. Standard clips and clamp bars on the front face of the fence are something which can be attacked with hand and power tools, and the relatively thin wires of the mesh can be cut with small hand cutters.

Security ratings of mesh systems are achieved by either adding accessories to strengthen the panel or by having a double skin. This makes for more pieces to construct, or if pre-assembled the pieces are bigger and heavier making it harder to manoeuvre. It’s always worth checking the weight of the panel for how easy it will be to install. Good visibility is believed to be a pro of mesh, however, when adding accessories or double skin, the visibility through the panel becomes much more difficult.

Mesh fencing can cause problems on uneven surfaces when it comes to installation. The panels are rigid therefore when approaching uneven surfaces there will either be a gap under the fence, or the fence has to be burrowed in the ground and ultimately stepped, thus slowing down installation and adding cost to the project.

Although standard mesh systems are more economical initially, when upgrading the security of the fence, such as adding anti-climb or anti-cut technology to tested security ratings, the cost can rise significantly beyond a comparable palisade system.

Palisade and mesh systems both have their positives and negatives. The right solution depends on the operational requirements of the site, the budget, aesthetics and the security level.

Get in touch to discuss your operational requirements or arrange a free site impartial consultation to help you decide the best security fencing for you or your clients. 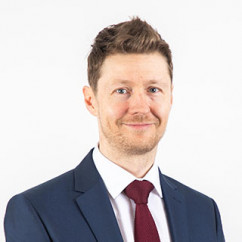 Adam has been at Barkers for almost two decades. Starting as a Sales Estimator the Area Sales, travelling to see customers on site.

He has been our UK and Export Sales Manager since 2010 and looks after seven Sales Estimators pricing work for fencing contractors. Adam is great at building relationships and providing excellent customer service.